Companies that rule the “Internet of Things” 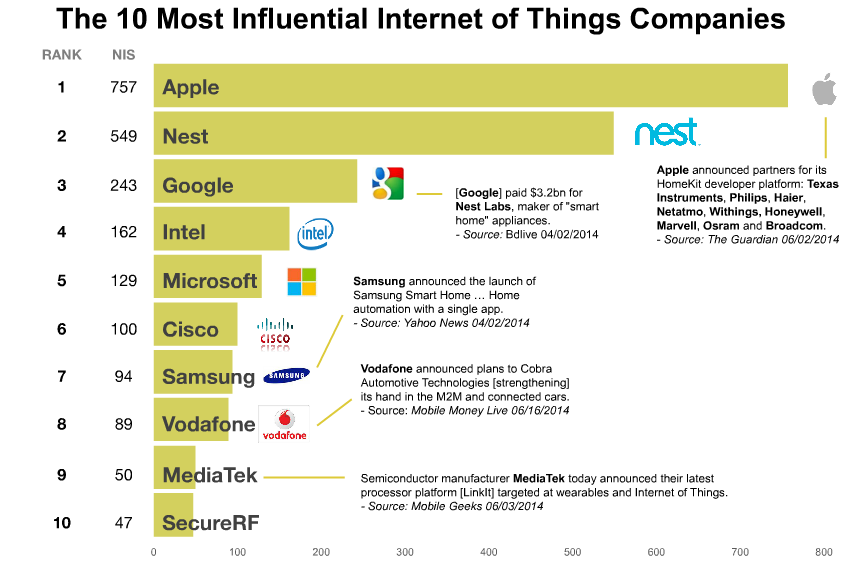 Companies that rule the “Internet of Things”

The Internet of Things (IoT) has been a buzz in the IT industry for some time, and the largest technology players are moving quickly to stake out the territory. In just the past month, Apple announced a new “smart home” platform, and Google made a similar announcement for Android and purchased Nest for $3.2 billion.

These moves and the history of both companies pushed them quickly to the head of the “Top 10 Most Influential Companies” in a new Influence Study focusing on the Internet of Things, released by Appinions. The companies listed in this category cover pretty much everything you can think of in the IoT space and offer products ranging from smart office equipment and wearable devices to smart home appliances and the ability to create smart automobiles.

According to Appinions’s study, the volume of influential conversations about IoT registered an increase of almost 70% between late March and early July. Within this time frame there was activity from Intel (which modified their managerial structures to increase IoT focus), Cisco (who made three strategic investments), Zebra (who purchased Motorola’s enterprise business for nearly $3.5 billion), and others. These moves got a lot of attention and reaction, thus influencing the scores to increase around each announcement.

Another issue that caught my eye in this study is what people are discussing when they are mentioning the internet of things. Appinions put together a little tag cloud for that, and it’s no surprise that words like privacy, data security, and big data, are among the most common themes.

When it comes to individual products, the Dropcam smart camera and Honeywell’s Lyric intelligent thermostat gained the top two spots for gathering the most influential reactions, while the Logitech Harmony Remote, Philips Hue Bulb, and Kwikset Kevo E-Lock are among the other top IoT products covered.

“Four months ago, Intel and Microsoft were dominating the conversation but we’ve seen a tremendous surge on the consumer side with shipping products and these consumer-facing moves from Apple and Google. And while smaller in scale, we also found that the Industrial Internet is garnering a lot of attention in its own right,” said Larry Levy, Founder and CEO of Appinions.

To create this report, Appinions identified and analyzed over 40,000 opinions relevant to the Internet of Things from a pool of over 100 million documents plus social media posts. The opinions and the reactions generated were then ranked using a proprietary scoring algorithm, which considers the people or entities reacted to these opinions, the credibility of the outlet where the reaction was published, and the overall volume of reactions to each opinion.